The People’s Republic of Chemicals–A Worthy and Important Read 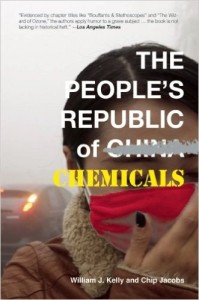 I wish everyone would read The People’s Republic of Chemicals. And I’ll tell you why. China’s pollution crisis is highly underreported. Most people, myself included, have only a vague idea about the toxic soup of chemicals in China’s air, land and water—and even worse, how severely the toxicity is impacting its people.

Authors of the award-winning environmental book, Smogtown: The Long-burning History of Pollution in Los Angeles, William J. Kelly and Chip Jacobs, do a great service in tackling this even greater environmental crisis—one with global implications. According to Kelly and Jacobs, China’s runaway pollution is the cause of a staggering 1.2 million premature deaths to its people per year in the forms of cardiovascular disease, respiratory ailments and cancers of the liver, bone, lung, breast, and blood. They also report on how China’s toxic air pollution extends well beyond its borders to neighboring countries and even across the Pacific to the western United States. Bottom line: The subject is pertinent to us all.

Written with literary flair and a wide and colorful range of vocabulary, and delivered like a play-by-play recount of an athletic event, Kelly and Jacobs give fascinating social and historical context to provide important insight into what drives China’s relentless pursuit of economic growth and power. They write, “China would rejigger into an export-manufacturing colossus dedicated to Western store shelves. This model was its chance to vault out of its excruciating past, to erase those centuries hostage to foreign occupation and shuffling backwardness. Bottom-barrel wages, slack red tape, pliant locales and sheer size conferred it to transcendent advantages that Mexico, Taiwan and other non-Western factory bastions could never sustain. As the world’s friendliest landing pad for outsourced production, air quality would have to take it on the chin, at least for now.”

The authors’ thorough handling of the subject matter reveals some uncomfortable truths about the U.S. too. Mainly, they underscore the fault of the Clinton administration, which failed to push baseline environmental standards for China’s manufacturing when the 2001 WTO/China agreement was being negotiated. That was a game-changing “missed opportunity” and a massive failure. Also, they point out that China could not flourish without U.S. multinationals and corporations eagerly lining up to reduce their manufacturing costs by taking advantage of China’s cheap labor and convenient environmental loopholes—or a shrinking American middle class needing and wanting more affordable goods and luxuries. We play a role too.

While it’s disturbing to read the lack of action taken by the Chinese government to legislate or enforce environmental standards—let alone even acknowledge there’s a serious problem, the reports of angry citizens protesting with some success is heartening. The enormous price China and the world are paying for consumerism is never more evident. Lives are at stake. Heavily reliant on dirty coal for energy production, and sitting atop the world’s largest coal reserves, the authors remind us and the world that China truly holds our future in its hands. Yet, change is possible. And change starts with awareness. Thank goodness the Mandarin version of this book is nearly ready.

Well written, informative and insightful—The People’s Republic of Chemicals is a worthy and important read. Share it with your friends.

This entry was posted in Uncategorized. Bookmark the permalink.